And just like that, getting around Woodforest is even easier.

Spanning 1,300 feet, the bridge was a two-year, $5.53 million project funded in the Montgomery County 2015 road bond package. Smith & Company and Vulcan Materials Company were the contractors on the project.

Timing for the enhanced access couldn’t be better — especially with our quickly growing roster of commercial enterprises. Conveniences such as Harvest Market and Sterling Ridge Orthopaedics & Sports Medicine — both newly open — are bringing more people into Woodforest than ever before.

The Lake Creek bridge was the final phase of a $17.3 million expansion of Fish Creek Thoroughfare included in the bond package.

Other improvements to Fish Creek Thoroughfare include an overpass over FM 2854 and nearby railroad tracks. 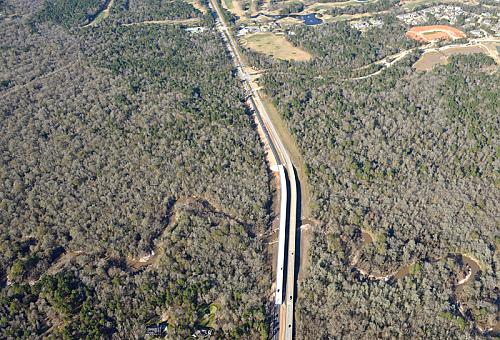 Lennar Model Home Invites You In